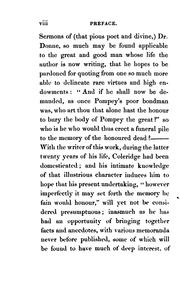 Published 1838 by W. Pickering in London .
Written in English

No more published; the author collected material for a second volume, but destroyed it before his death.